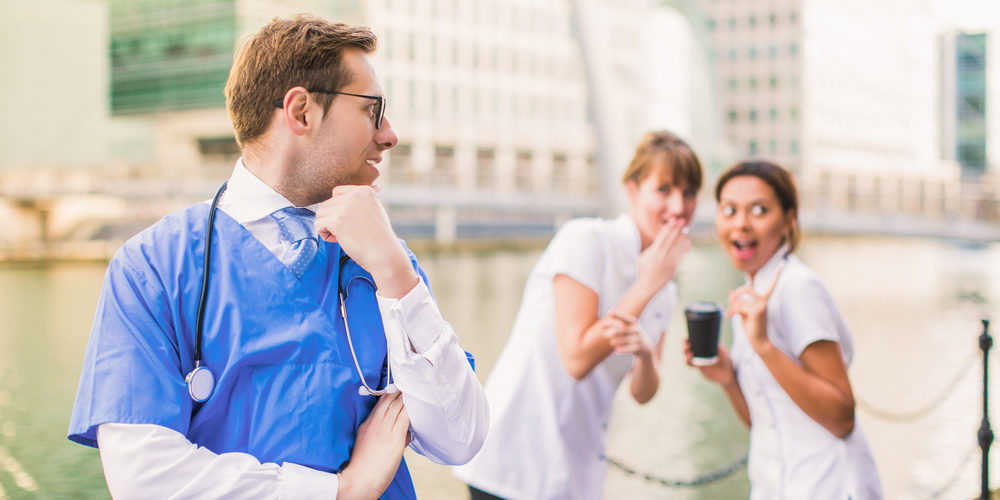 It was the first – and the last – time I went to this doctor.  When I walked in, not only did I feel like I was assaulted, I felt like I was doomed.

All I wanted was an annual check-up, but when I approached the reception desk for my appointment, the tension was so thick, I felt like I could almost chew it. I caught the tail end of a discussion between two women in scrubs that was loud and getting louder. While they did not mention a name, they gestured towards the receptionist; I gathered their ‘discussion’ was about her. I couldn’t hear the entire conversation, but I clearly heard  “Well, she’s always doing that!”.  That confirmed my suspicion.

Conflict between and among staff members always seems to affect service delivery.  Obviously, they were having a conflict and I knew my experience was going to be affected. After all, how can the staff focus on the patient if they are busy defending themselves from the office bully?

The atmosphere was not what I expected; it was so intimidating that I almost walked out.  I had waited several weeks to get this appointment so I wasn’t going to reschedule my appointment just because a couple of employees couldn’t get along.

Uncomfortable with and humiliated by the conversation between the bickering employees, the receptionist stared at her computer as she asked “Name?” and handed me a clipboard.  I accepted the clipboard and started to fill out the forms.  I then realized that I had already completed these forms and submitted them using the patient portal.  I mentioned this to the receptionist and she mumbled “We’ve been having trouble with that portal so you’ll have to do them again.”  I could hardly hear what she was saying as she was so upset she appeared close to tears.

I was aggravated by her behavior but I wanted to comfort her as she was clearly struggling. It was obvious that this young woman at the front desk was being tormented by abusive co-workers.  It was affecting her work as well as the atmosphere in the office.

I, too, was frustrated that my time in this doctors office was impacted by bickering employees.   There was little professionalism and my confidence in the practice handling something as simple as an annual check-up was completely gone.

Today, the phrase for the behavior I witnessed isIncivility in the Workplace or sometimes Workplace Bullying.  This is a very costly issue – not only as it relates to employee turnover and performance, but also as it relates to dissatisfied patients who leave the practice.

There is no justification for a workplace that tolerates incivility and bullying. Harassment doesn’t just happen, it is allowed to happen.  It starts like a tiny cancer and spreads so quickly that it seems to come from nowhere.

Passion for Patients™ teaches techniques to help staff identify and combat incivility to keep it from ruining a medical practice.  Contact us to learn more.

How does your practice add up? Find out now with our interactive survey and find out your score!

Ready to take the first step to increase profit margins, recruit and retain the best and most talented staff, and boost patient satisfaction scores? Let’s talk to see how I can help you make it happen. Please fill out the short form or call me: 602-677-1614